Is the ECB killing democracy? 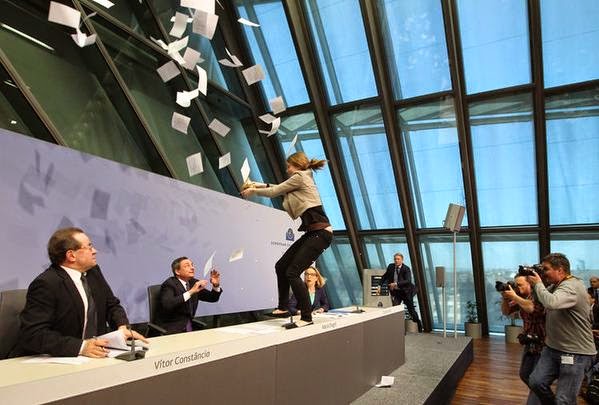 This young lady, German philosophy student Josephine Witt, jumped on the table when Mario Draghi, president of the European Central Bank, gave a press conference at the headquarters of the ECB in Frankfurt on April 15, 2015. It drew a lot of media attention including images showing her action and her beauty. One commentator admired her elegant jump on the table. Another observed that a guard took her at her breast.

It took me a while before I found on internet the text of the leaflet Josephine Witt was throwing around while standing in front of Draghi on the conference table - see text below. As you can hear in this video, Mario Draghi Showered With Shouts, Confetti in Protest or this, ECB President Mario Draghi attacked by protester, she also shouted: "End ECB dictatorship!"

In my previous draft post I raised the question of whether current capitalism is killing democracy. Many years ago I came to the conclusion that it indeed does kill democracy and wrote various pieces arguing this. I just mention two: "The International Monetary Crunch: Crisis or Scandal?", Alternatives, July 1987, and "The economy is too serious a thing to be left to the economists", April 25, 2008.

Recently, my wife returned enthusiastically from a talk given at the then occupied administrative centre of the Amsterdam University by Wolfgang Streeck, emeritus director of the Max Planck Institute for the Study of Societies. If you are interested in Streeck's thoughts, you may want to read this article, "The Crises of Democratic Capitalism" (in either English, Spanish or Portuguese).

I intend to eloborate on my previous post when I have time and appetite.

Here is the text of the leaflet Josephine Witt threw around at ECB's headquarters:


We own our own lives -
and in the face of the overwhelmingly powerful external
environment of the ECB’s monetary police,
sometimes it’s hard to remember.

We own our own lives -
and they’re not the chips in the ECB’s gambling game,
not to be played with, not to be sold, not to be devastated.

We own our own lives!
-will be the outcry of those who face repression,
when we begin to see our poverty not as personal defeat or unchangeable destiny.

ECB,
master of the universe,
I come to remind you that there is no god,
but there are people, behind those lives,
and if you rule instead of serving,
you will hear our outcries louder, brighter, inside and outside your halls, everywhere, and you shall deserve no rest.

And while the ECB can only persist in its autocratic hegemony, depending on states of surveillance and police,
finally, the daily violence is enrooted here,
we will find our radical answers
and act with no violence against those human disasters.

Because we will not accept the insane narrative that the ECB wants to impose to all people wherein even freedom of speech and dignity can be sold to the bank in order to survive. Persisting in its arrogance against the people, the ECB increases perilously its own debt to them. A press conference is not enough to call it "democracy".
I do not expect this illegitimate institution to hear my voice, neither to understand my message,
it would be too much to ask,
but I know for a fact that a lot of people do understand very well the matter.
Today I'm just a butterfly sending you a sentence, but be afraid more are coming. We will take back the power over our own lives.
The ECB’s debt is not yet paid.

Posted by jan joost teunissen at 4:10 AM