Here is an interesting article in the New York Times about bondholders ('vulture funds') obstructing a reasonable restructuring of Argentina's debt.

WASHINGTON — Last week, the United States Supreme Court decided not to review a ruling in the Second Circuit Court of Appeals whose effect is that Argentina must pay “holdout” creditors who refused to participate in debt restructuring agreements that Argentina reached with the majority of bondholders following the 2001 default on its sovereign debt. Argentina’s lawyers warned that the court’s decision created “a serious and imminent risk” that the country would again be forced to default. But the ruling also has profound and disturbing implications for the functioning of the international financial system, and even the United States would most likely be adversely affected.
Parties as diverse as the International Monetary Fund and leading religious organizations wanted the Supreme Court to overturn the decision, and briefs supporting this position were filed by the governments of France, Brazil and Mexico, as well as by the Nobel Prize-winning economist Joseph E. Stiglitz. The I.M.F. — which has had mostly sour relations with Argentina since its involvement in that country’s 1998-2002 recession — was also planning to file a brief on Argentina’s side to the Supreme Court, but was blocked by the American government from doing so. This action may have influenced the court’s decision not to hear the case.
Argentina defaulted on its international debt at the end of 2001, following a deep recession. After years of negotiations, the government reached a restructuring agreement with its private creditors, in which the bondholders accepted a loss of about two-thirds of the value of their bonds. In 2005, 76 percent of the creditors had signed on; by the end of 2010, more than 90 percent had. Argentina has made all of its payments on the new, restructured bonds, on time.
The complication was over a group of “holdout” bondholders who did not agree to the restructuring. The plaintiffs in the New York case are widely known as “vulture funds,” because they bought the bonds after the default at a fraction of their value, hoping to use court rulings like this one to force payment at the bonds’ original face value.
The appellate court ruled that if Argentina was paying the holders of restructured bonds, it must also pay the holdout or vulture fund creditors in full — and its decision implies that the punishment for an attempted default could be never-ending. This raises the question of how many decades a people should be forced to suffer for the mistakes or transgressions of earlier leaders — whether elected or, as is often the case, unelected. (Much of the Argentine debt, in fact, was incurred by a dictatorship.)
Another key implication of the ruling is that governments that are bankrupt would now find it difficult or impossible to negotiate a settlement with their creditors. Who will take a haircut on their bonds if they can refuse the terms and sue for the full value?
In the United States, and most other countries, there are bankruptcy laws designed to allow for companies and individuals facing unpayable debt to make a new start. There is no such legal mechanism for countries, so these restructuring agreements are an important way of resolving problems of unpayable sovereign debt.
The court’s decision would make it difficult to issue the new bonds needed for restructuring, as well as further debt in the future. Just one holdout bondholder or vulture fund creditor could torpedo the process.
In addition, Argentina’s default and devaluation in 2001-2 is widely regarded as a success. The country’s economy shrank for just three months after the default, and then began a rapid-growth recovery. By the end of 2011, Argentina had achieved a record rate of employment, reduced poverty by nearly 70 percent and allowed for a tripling of social spending in real terms.
A decade after the devaluation, the Argentine economy has run into trouble — partly because the vulture funds have prevented it from borrowing on international markets — but there is no doubt that Argentines are vastly better off for the path that was taken. For comparison, look at Greece: After six years of austerity-driven recession, which included a 40 percent cut in health care spending, the unemployment rate stands at 26.8 percent (and more than double that rate for youth) and the net public debt has grown to 169 percent of the country’s gross domestic product.
Most experts agree that the appellate court ruling would have a destabilizing effect on international financial markets. There is economic justice to consider, too. Argentine bondholders were paid high interest rates on their bonds because there was risk. Capitalism is not supposed to be a “heads I win, tails you lose” bet — but the Second Circuit Court’s decision would make it that way for sovereign debt bondholders.
Argentina may find a way around the court’s decision, by issuing new bonds and making payments that are outside of the court’s jurisdiction. But this ruling in favor of the vulture funds will do continuing damage to ordinary people around the world that will show up in future debt crises.
Mark Weisbrot is the co-director of the Center for Economic and Policy Research and the president of Just Foreign Policy.

Posted by jan joost teunissen at 12:49 AM No comments: 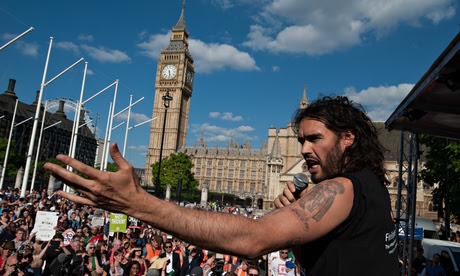 Tens of thousands of people marched through central London on Saturday afternoon in protest at austerity measures introduced by the coalition government. The demonstrators gathered before the Houses of Parliament, where they were addressed by speakers, including comedians Russell Brand and Mark Steel.
An estimated 50,000 people marched from the BBC's New Broadcasting House in central London to Westminster.
"The people of this building [the House of Commons] generally speaking do not represent us, they represent their friends in big business. It's time for us to take back our power," said Brand.
"This will be a peaceful, effortless, joyful revolution and I'm very grateful to be involved in the People's Assembly."
"Power isn't there, it is here, within us," he added. "The revolution that's required isn't a revolution of radical ideas, but the implementation of ideas we already have."
A spokesman for the People's Assembly, which organised the march, said the turnout was "testament to the level of anger there is at the moment".
He said that Saturday's action was "just the start", with a second march planned for October in conjunction with the Trades Union Congress, as well as strike action expected next month.
People's Assembly spokesman Clare Solomon said: "It is essential for the welfare of millions of people that we stop austerity and halt this coalition government dead in its tracks before it does lasting damage to people's lives and our public services."
Sam Fairburn, the group's national secretary, added: "Cuts are killing people and destroying cherished public services which have served generations." (...)
Posted by jan joost teunissen at 10:26 PM No comments: