Greeks losing their house, their hope and their life


Α 56 year-old man has been found hanged in the yard of his home, at Isthmia, Korinthia, Greece.
The previous day the 56 year-old man had been notified officially that he is going to lose his house.
The man let a note in which he asked from his relatives to forgive him and explaining the reasons he was pushed to suicide.
The Finance Ministers of the Eurozone, under the leadership of the German government, the European Commission and the IMF, acting like a kind of Mafia operatives of the Bankers, are exercising now a maximum of pressure to the SYRIZA governement in order to alleviate any protection of houses from Banks demands.
DDP

The finance ministers of the 19-member Eurozone have decided to postpone disbursing 1 billion euros ($1.12 billion) to Greece.
The reason for postponing the payment is that Greece has not yet changed the provisions of a law protecting debtors’ main housing property from creditors to the EU’s satisfaction.
The disbursement will now be discussed at the next Eurogroup meeting, on April 5, provided Greece has made the necessary changes.
Pierre Moscovici, European Commissioner for Economic and Financial Affairs, had indicated earlier Monday, that he expects an agreement with Greece on the issue in the coming days.
Valdis Dombrovskis, the Commission Vice-Chairman for the Euro and Social Dialogue, and Portuguese Finance Minister Mario Centeno, the Eurogroup President, echoed Moscovici’s views.
Read more at http://www.ekathimerini.com/238475/article/ekathimerini/business/eurogroup-delays-1-bn-disbursement-to-greece 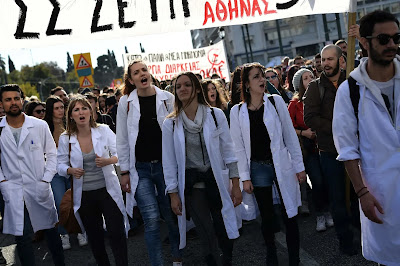 Health workers during a general strike in Athens in 2017. Annual state spending on mental health was halved in 2012, and it has been trimmed further each year since then.CreditAris Messinis/Agence France-Presse — Getty Images
The New York Times - Feb. 3, 2019
ATHENS — Greece’s decade-long economic crisis has taken a heavy toll: Hundreds of thousands of jobs were lost, incomes were slashed and taxes were raised. Hopes for the future were dashed.
For Anna, 68, the crisis had particularly devastating consequences. Her husband, a retired bus driver, killed himself in a park two years ago at age 66 after a series of pension cuts deepened his despair.
“He kept saying, ‘I’ve worked so many years. What will I have to show for it? How are we going to live?’” said Anna, who asked that her full name not be published to protect her family’s privacy. After two years of therapy, she now volunteers to help others struggling with mental health issues.
Depression and suicide rates rose alarmingly during the Greek debt crisis, health experts and studies say, as the country’s creditors imposed strict austerity measures that cut wages, increased taxes and undermined the ability of health services to respond to a crisis within a crisis.
“Mental health has deteriorated significantly in Greece, with depression being particularly widespread, as a result of the economic crisis,” Dunja Mijatovic, the Council of Europe’s commissioner for human rights, said in a November report. That has led to overcrowding at psychiatric hospitals and clinics and a 40 percent increase in suicides from 2010 to 2015, the report said.
For those fighting the problems on the ground, the trend does not seem to be abating. The mental health organization Klimaka reported a 30 percent rise in calls to its suicide hotline last year, and a comparable rise in visits to its day center.
“The financial crisis has increased people’s vulnerability to suicide,” said Kyriakos Katsadoros, Klimaka’s director. “Some even ask about euthanasia.”
Suicide rates in Greece remain relatively low for Europe, with five suicides per 100,000 people compared with a regionwide average of 15.4, according to World Health Organization data for 2016, the most recent available. The rate of increase is high, however. It spiked from 3.3 per 100,000 to 5 between 2010 to 2016.
The highest annual increase came in 2015, the year strikes and social upheaval reached a climax as Greece’s leftist-led government wrangled with the country’s international creditors over the terms of a third bailout.
The suicide rate then dropped in 2016 and 2017, police figures show, only to rise again in the first 10 months of 2018, according to police figures that also show that suicides among those ages 22 and under more than doubled.
Many suicides in Greece go unreported because of the Orthodox Church’s reluctance to provide burial services to those who take their own lives, although the church’s stance is changing, nongovernmental organizations say.
The Greek Health Ministry set up a committee of mental health experts in November to prepare awareness campaigns, as well as plans to train general practitioners to better detect depression and other mental health issues. In the meantime, the health system’s struggles to address the problem are evident.
At Evangelismos, one of the capital’s largest state hospitals, dozens of patients were being treated in the corridors of the psychiatric ward during a visit in April, “an unacceptable situation,” the Council of Europe’s anti-torture committee said in a report published in June.
In the summer, the hospital’s workers’ union complained to a prosecutor that the clinic was accommodating twice the maximum capacity, with foldout beds set up in corridors and in doctors’ offices.
“It’s like a stable,” said Dr. Ilias Sioras, president of the union, adding that people in all states — “catatonic and psychotic” — were being treated in the same space.
Dromokaiteio Psychiatric Hospital in Athens is also overcrowded, with admissions up 12.3 percent in 2017 and staff members regularly staging strikes denouncing the conditions. And at Dafni, the Attica Psychiatric Hospital, which takes only very serious cases, “the impact of the economic crisis is reflected in the admissions,” said the director, Spiridoula Kalantzi, citing a 9.6 percent increase in 2017.
Posted by jan joost teunissen at 3:05 AM No comments: