Triffin, Tinbergen and Preventing the Next Global Financial Crisis 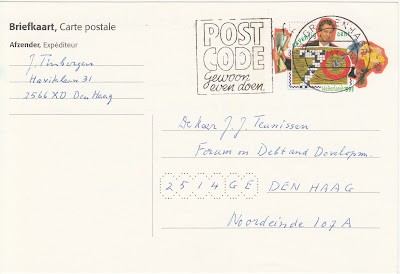 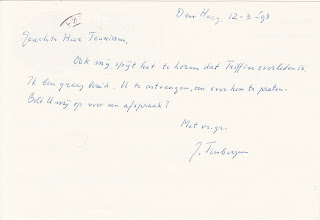 When Robert Triffin died I asked Jan Tinbergen if I could interview him about Triffin. As Tinbergen had much sympathy for Triffin and was on the Board of Advisors of FONDAD, he immediately sent me a postcard saying he was sad to hear about the death of Triffin and would be delighted to talk about him. He asked me to call him for an appointment.

I went to his home in The Hague, in Haviklaan, a rather modest house where he lived alone (his wife had died). I had been there before. In one of my visits I had proposed to arrange a taxi for him to facilitate his attendance to a FONDAD Conference at the Ministry of Foreign Affairs. "Thanks for the offer," he said, "but I prefer to go by tramway." And there he sat quietly at a table when I entered the conference room on the morning the conference started. I greeted him, we exchanged a few words and later, when I welcomed other participants, I pointed at the man with white hair sitting modestly and quietly at the table. "Is he really the great Jan Tinbergen?" asked one participant.

Tinbergen and I had a long conversation about Triffin and I incorporated part of what Tinbergen said in an article I wrote for the Duch newspaper NRC Handelsblad, "Robert Triffin, een bevlogen monetair genie" - Robert Triffin, a passionate monetary genius. Tinbergen reminded me of the key role he had given to Triffin in preparing the Report of the so-called RIO Group chaired by Tinbergen. He had asked Triffin to write the first technical report included in the report ("Reshaping the International Order") about the need to reform the international monetary system.

Triffin and the next global financial crisis

In that NRC Handelsblad article, I also included memories of Triffin's activities by Johannes Witteveen, Emile van Lennep and Tom de Vries, whom I had interviewed as well. The first two were also on the Advisory Board of FONDAD. Emile van Lennep's conclusion was: "In the long run, I always see a Triffin problem: how can one prevent international inflation or deflation."

Van Lennep's conclusion is shared by members of Robert Triffin International (RTI), a think group about the international financial system to which I also belong.

A FONDAD Group of 40 experts (FG40) is currently engaged in a discussion about how to prevent the next global financial crisis. I hope to inform you soon (within 3 months) about the outcome of that discussion.

Below is the first page of the article in NRC Handelsblad I wrote about Triffin in 1993. On the picture you see a meeting of the so-called Bellagio Group of academics and policymakers, which was similar to meetings organised by FONDAD. Emile van Lennep and Robert Triffin were key members of the Bellagio Group. I felt honoured and supported when both Triffin and Van Lennep (and others including Johannes Witteveen) helped me in making FONDAD a successful policy research centre and international forum for policy discussion. It was a pity that the Dutch Ministry of Foreign Affairs stopped providing core funding to FONDAD in 2007. However, thanks to the enthusiasm and free of fee cooperation by members of the FONDAD Network we are still active. I am very grateful for that cooperation and hope it will contribute to preventing a next global financial crisis. 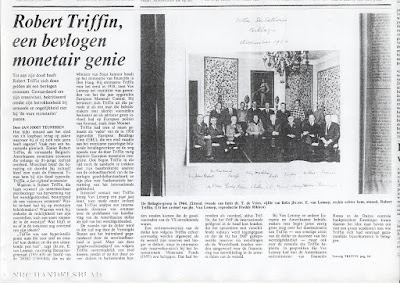 Posted by jan joost teunissen at 9:50 PM No comments: