The most challenging book we've ever written 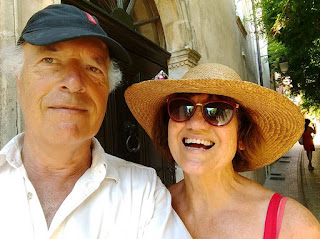 Aafke Steenhuis and I are concen-trating on finishing a book, The Big Rough Sea - World Ports and Globalization, due out in 2022. It will be a year of intensive work to get it done the way we want. It is the most comprehensive and challenging book we have ever written or edited (I have edited many books on the world economy, see FONDAD books - http://www.fondad.org/catalog/all.html).

We started the book in 2013, slowly, when we visited Latin America's largest port, Santos (Brazil), and Valparaíso (Chile). In the following years, we conveniently visited ports in Asia (Shanghai, Hong Kong, Singapore, Mumbai, Dubai), North America (Los Angeles and Long Beach) and Europe (Hamburg, Rotterdam, Barcelona, ​​Marseille, Genoa, Piraeus ). We have yet to go to Cape Town and Alexandria in Africa, and hope we can also visit Murmansk and Sydney - all in 2021.

For the book, we have made a website: The Big Rough Sea - World Ports and Globalization.

Here is the pitch we wrote for our publisher in Rotterdam: 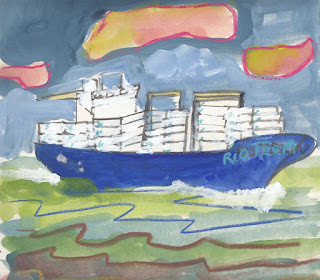 “We live in an age deeply influenced by maritime enterprise, but our percep-tions of its importance have shifted almost 180 degrees in only two or three generations. Today we see pleasure where our forebears saw peril, and we can savor the fruits of maritime commerce without being remotely aware of its existence, even when we live in cities that originally grew rich from sea trade,” says the American maritime writer Lincoln Paine, who is one of the many persons Aafke Steenhuis and Jan Joost Teunissen have interviewed for their book.

Thousands of years ago, international trade was conducted by land and sea from the ancient cultural regions of Egypt, Mesopotamia, China and India. In the course of time other peoples, such as the Greeks, the Romans, the Arabs, the Vikings took part in this early globalization. From the Middle Ages, international trade became entangled with powerful European city-states, sailing ships with cannons, the establishment of trading posts and the conquest of colonies, slave trade, industrialization and exploitation, steam shipping and diesel oil shipping. After the introduction of containers, around 1960, cargo ships became bigger and bigger, transport costs lower, with the result that production and labor moved to low-wage countries. Asian countries developed rapidly. The seven largest world ports are now in China. Rotterdam was the largest port in the world from 1962 until 2005.
The globalization of the last decades has created a global consumer society that is in the process of bringing about dramatic climate change and extinction of the species. Desperate efforts are now being made to turn the tide by making ports and ships cleaner and switch from fossil to green energy. This means that ports have become the pivot in the search for a better, cleaner world, because ninety percent of world trade is carried out by ship.
How can the runaway global economy become sustainable? How can wild capitalism be tamed?
Ports used to be the distributors of products, techniques, cultures, religions, as well as infectious diseases. They still supply oil, coal, grains, machines, cars, chemicals, smartphones and many other manufacturing and consumer goods. What is the history of these ports? How is and was life in these port cities? How do the people who work there view, for example, the rise of China and other Asian countries, climate change, the future of ports?
With those questions in mind, Aafke Steenhuis and Jan Joost Teunissen traveled to port cities in Asia, North and South America, Africa, the Middle East and Europe. They visited fascinating and colorful ports such as Shanghai, Hong Kong, Singapore, Mumbai, Dubai, Piraeus, Genoa, Marseille, Rotterdam, Hamburg, Alexandria, Cape Town, Santos and Los Angeles. In The Big Rough Sea - World Ports and Globalization they map out the history and future of world ports and world shipping.
Posted by jan joost teunissen at 10:40 PM No comments: