Few people know that Amsterdam is the fifth-largest port in Europe, after Rotterdam, Antwerp, Hamburg and Marseille. Nor do many people know that the largest shipbuilding yard of the world, NDSM, once was in the northern part of Amsterdam, the part of the city where I live.

My wife, Aafke Steenhuis, has just published a book, "De magie van het IJ" (The magic of the IJ), about the history of the northern part of Amsterdam that until 1921 was a separate municipality, Nieuwendam. 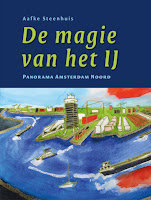 In the book, richly illustrated with her own paintings, Aafke gives a vivid picture of Amsterdam North, which is becoming increasingly popular, among other things, because of EYE, the film museum located at the northern border of the IJ, the water that divides Amsterdam from its northern part and is pronounced as 'eye'.

In the video below (filmed by me) you see Aafke's visit to Damen Shiprepair Amsterdam, located at the same spot where once the famous NDSM yard was building and repairing ships.


Posted by jan joost teunissen at 2:25 AM No comments:

The French Socialist Party helped the FN to rise

When I said yesterday that neoliberal Europe helped the National Front win the elections in France (get more votes than any other party) I included the French Socialist Party which, just like other socialdemocratic parties, has embraced neoliberal policies.

Today I read that French political scientist Fabien Escalona said more or less the same in an interview with the French journal Challenge of 7 December 2015. When asked the question: "Can we say that the Socialist Party (PS) has contributed to the rise of the National Front (FN) in recent years?" he answered:

"The question may seem paradoxical, as the PS appeared since the 1980s as a republican and universalist "bulwark" against the FN of father and daughter Le Pen. However, you can say that the PS indirectly contributed to its progress, as a government party who is responsible for policies and options rejected by a growing number of voters.In this regard, however, the PS shares this 'responsibility' with the right of the RPR then UMP and recently renamed "Les Republicains" (LR). In fact, both the PS and the LR have themselves more or less aligned with a moderate neoliberalism, unable to address mass unemployment and imprisoned by supra-electoral and supranational constraints of European integration, an integration endorsed by the two major government parties. For reasons of law and humanity, immigration flows (around 260,000 people per year), modest but negatively perceived by FN voters, have never been drastically reduced either. For all these reasons and because the FN never took charge of national power, it can present itself as an attractive alternative for those who fear (or objectively suffer) an individual and collective declassing.
Posted by jan joost teunissen at 5:53 AM No comments:

The victory of Marine le Pen's Front National in France is partly the result of the authoritarian, neoliberal policies of the European Union.

As I said in a speech in Paris on 29-30 October 2011, "there is the other danger that is already manifesting itself, the danger that the current capitalist system, with its privileges for business and political elites, creates anger and frustration among people and stimulates xenophobic, nationalistic, anti-establishment, anti-intellectual movements and parties like we already have in the Netherlands."

In my Paris speech I only mentioned the Netherlands, where Marine le Pen's colleague Geert Wilders (Party for Freedom, PVV) was becoming increasingly popular - in recent voting polls h e received the largest number of votes among the Dutch political parties - but I was obviously also thinking of the Front National in France.

Strangely enough I have not yet read this view in comments in the European press. This morning, looking for similar views, the only article I found is one by Pierre Khalfa and Thomas Coutrot, "Après la Grèce : quelles leçons pour la gauche européenne ?"