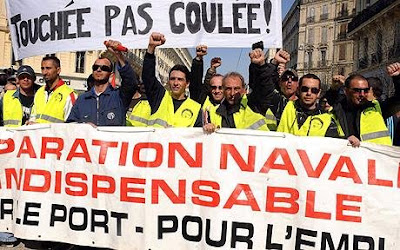 People protest during France's second nationwide strike in two months, to demand a boost to wages and greater protection form the crisis, in Marseille Photo: AFP
There is too much information about the economic, social and political problems in this mad world. I mean, all this information seems to contribute more to continuing the mess we are in rather than solving it.

Almost every day I continue reading articles and analyses. How can I put some order in it, distil the useful, make it my own, and share it with others?

The best would be to throw out a few thoughts and stay close to my feelings. I have the impression that too many of the people I read -- all this information is written by people -- are driven by the desire to impress rather than share in a modest and friendly way information or views. In doing so, they reproduce the monster, even though their intention may be to conquer it.

Another problem is that important information is missing and that there is little agreement among economists and politicians about the origins of the current economic crisis and the best ways to solve it. In my previous post I reiterated my view that the crisis stems from a too little controlled, global financial system based on the US dollar and reported with some optimism that the Chinese prime minister seemed to share this view, at least partly. But I am afraid this view will lead to a change in the system only if it is shared more widely. My guess is that most policymakers are more interested in making work again the current system than replacing it by a new one. All the talk about "reform" and "overhaul" of the system is more rhetoric than reality.

Then there is the problem of arrogance among economists. In particular, U.S. economists are good at telling the general public, the government or anyone else what is good for them. Paul Krugman did so recently in Spain, recommending to lower wages and prices, but he is no exception. Could you think of a psychologist prescribing you how to behave?

Nonetheless, economists have hardly any authority to tell you what's good for you. They are social scientists and their object of study is dependent on what you and others are doing and longing for, individually and as members of groups and organisations. Economic advice is based on all kinds of assumptions about a limited aspect of human behaviour and should be discussed in a broader social and political context. Unfortunately, this rarely happens, thus promoting the status of economists to that of doctors of society -- a status they cannot live up to and ought to tell people they do not deserve.

This morning I read in the Telegraph that today, "Up to two million people were expected to take part in more than 200 demonstrations protesting against President Nicolas Sarkozy's handling of the global financial crisis. The biggest was in Paris, where militants called for an increased minimum wage and higher taxes for the rich."

Why are so few economists and politicians advocating higher minimum wages for the poor and higher taxes or lower salaries for the rich?

PS: Later I read that Krugman received 100,000 euros for his lecture in Spain. I did not find official confirmation that he indeed received that amount.
Posted by jan joost teunissen at 3:33 AM 1 comment: