Several centuries ago, the Europeans were the first to sail their ships across the entire world. The economies of the Dutch, the Portuguese, the Spaniards and the English got enormous boosts because of their large ports and sailsmanship. Once, Amsterdam was the largest port of the world and, many years later, Rotterdam was the largest port of the world.
A lot has changed since then. Eight of the ten largest ports in the world are now to be found in China, and only one of them remains in Europe: Rotterdam.
What many people do not know -- not even in Amsterdam -- is that Amsterdam was until recently the fourth largest port of Europe. Recently it lost this position to Marseille.

Below is a painting my wife (Aafke Steenhuis) made of the old port of Marseille. 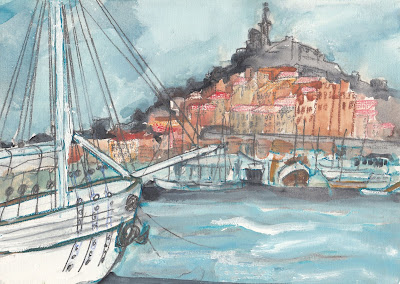