Europe should see China as an ally


Europe should no longer see China as a threat and instead see it as an ally.

There are economic reasons for considering China as an ally. Europe must work closely with China on sustainable, inclusive, social and green economic policies and on addressing international economic issues such as global warming, extinction of the species and the need for reform of the global financial system*). This benefits Europe, China and the rest of the world.

There are environmental reasons for considering China as an ally. In the fight against climate change, China is at the forefront of some clean air policies, investigating opportunities to improve green technologies and make them cheaper, while striving for international cooperation rather than competition. China is the world’s largest investor in renewable energy. China has signed the Paris Climate Agreement, while the United States has not done so and has now even officially declared it will not sign it.

There are political-military reasons for considering China as an ally. Europe should stop China bashing and presenting the country as a threat to global security, as is popular with Western media and politicians today. Europe needs to develop a fresh, unbiased view of China's role in international security. China’s main concern on international relations is its own national security, similar to Europe’s.

Instead of saving NATO from its "brain death" (words of President Macron), Europe should look at China without prejudice, fear and arrogance. It should distance itself from American arrogance and hegemonic pretension. Seeing China as a potential ally will provide a sensible European perspective on world security. At the same time, such thinking can help improve relations with Russia, another major player in global security.

There are also mass psychological reasons for considering China as an ally. It will help enormously in overcoming the racial and political rejection of China. The framing of China as a threat in recent years has been successful in brainwashing the minds of many intellectuals and politicians.

Yes, I am concerned about such dictatorial, repressive or authoritarian issues. But then I expect equal concern about authoritarian, repressive and dictatorial issues in Europe, even though they may be less visible, less dramatic and can be criticised publicly. European democracies are more repressive and authoritarian than they claim to be. An example of this is how European technocrats in economic and central bank ministries dictate economic policies to the detriment of large sections of the population, thus undermining democracy - see the case of Greece.

I think or hope that China is interested in good relations with Europe. A lot is being written about China's expansion in Europe, buying ports and making other foreign investments in European countries like Greece, Italy and Spain. It is presented as if the Chinese are taking over key infrastructure in Europe, thus silently preparing invasion -- the Huns of the east invading civilised Europe. But history has it differently: it were the civilised or not so civilised Portuguese, Dutch and British who invaded South and East Asia and occupied or subjugated (parts of) big countries like India and China. Holland even stuck to its colony Indonesia after the Second World War until the United States convinced the Dutch to give it up. China's interest in Europe is not to invade or occupy it. Its interest is to develop economic ties with Europe.

China and Europe play an important role in the cooperation of the multipolar world, particularly when the US is becoming an insecure superpower behaving irrational or irresponsibly in many areas due to bad domestic politics and lingering Cold War mentality.

Together China and Europe could balance the US so as to avoid the collapse of an already fragile world system under threat by global warming, extinction of the species**), and war. If history has taught one dire lesson to the Europeans it is that every effort should be made to maintain peace and a just social order. The issue of how European countries could be better governed by involving its inhabitants in policy making rather than leaving it to technocrats and powerful business (see my post Is Europe run jointly by its technocrats and CEOs?), and the faltering criticism of European democracies and institutions, are pressing issues that Europeans have to solve to become real democracies.

*) In March 2009, there was a plea by China's central banker Zhou Xiaochuan to create a new global reserve currency replacing the dollar. Jan Joost Teunissen reminded in his 2009 speech "Why should we have listened better to Robert Triffin?" in Louvain-la-Neuve that three years earlier Fan Gang, member of the Monetary Policy Committee of China's central bank and member of the Fondad Network, made a similar plea in his contribution to the Fondad conference and book Global Imbalances and the US Debt Problem: Should Developing Countries Support the US Dollar?

**) A recent UN panel report on biodiversity says that humanity faces a biodiversity crisis just as profound as the climate crisis."Biodiversity," the panel declared, "is declining faster than at any time in human history." "What is needed, is a change to the definition of what a good quality of life entails—decoupling the idea of a good and meaningful life from ever-increasing material consumption."

Posted by jan joost teunissen at 12:21 PM No comments:

Johannes Witteveen and I had a long and interesting conversation about "the" global economy, the "crisis", and the need for a change in thinking and policies... And, then, towards the end of our meeting at his house in Wassenaar, we suddenly were speaking about the making of music. Here is a transcript of that part of our conversation:

- When I was ten years old I stretched rubber bands on an old shoebox. (Witteveen laughs) I liked the vibration.

- And when I was a bit older, I made a guitar of cardboard on which I could play a Christmas song ("Silent night, holy night..."). And when I was 13,  I bought a guitar and since that time I play guitar.

- The best part of playing guitar is to let emerge something from one tone. Often I feel myself more as a kind of medium than a creator...

Yeah ... By improvising something happens to you. That is very nice, and plays a large role in Sufism. Meditative music. The tambura is used for that, that's an Indian instrument my wife has played many times, to come to meditation. Through the sound of one tone, over and over again, and then she softly sang a bit.

- As a boy I climbed in tall trees, and then I felt the wind blowing around my ears ...

(Laughing) Yeah. That is different from thinking. It goes much deeper.
Posted by jan joost teunissen at 1:32 PM No comments: 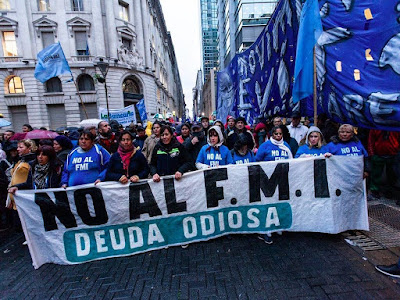 The crisis that was not prevented: lessons for Argentina, the IMF, and globalisation

What caused Argentina's financial crisis?
This book provides an overview of the current thinking about the Argentine crisis and reveals the limitations of the so-called "Washington Consensus". The book results from the international research project Global Financial Governance Initiative, which brings together Northern and Southern perspectives on key international financial issues. The book examines lessons to be learned, and present ideas on how future crises in emerging and developing economies might be prevented.
Chapters include:

Posted by jan joost teunissen at 9:04 PM No comments: