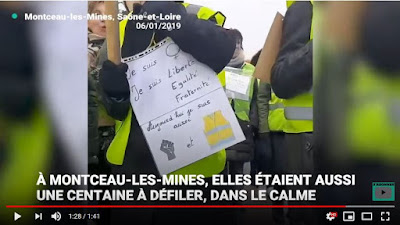 A key problem of Europe is its lack of democracy. Sure, we have elections, but that's not democracy. Elections can be a means to prevent that the same party or the same coalition of parties rules all the time. But when parties have become (1) rather similar in their political views and ways of operating, and (2) are representing above all the interests of priviliged persons and groups, representative democracy does not deliver what it should deliver: decision-making power of the people.

What I like in the article below (published by Politika and translated from Spanish) is that Luis Casado points to this fundamental flaw in representative democracy in France, in Europe, and elsewhere. The other thing I like in his article is the way he describes the protest of women yellow vests in the eight mass demonstration (Act VIII) of the gilets jaunes in France.


Act VIII. The yellow vests don’t give up. We’ll not move back a millimeter is their motto. They are refractory to empty speeches, to void promises and to smoke screens. Now, the women decided to go out on the street. Alone. Because it is not only necessary to feed the children, to earn the daily pot, to manage the home, to keep occupied the roundabouts ... but also show that theirs is the Quiet Force. The violent ones are in the government. Luis Casado tells it ... and it will not be the last episode ...

What do the yellow vests want?

This is how Benjamin Grivaux, minister and spokesman of the government of Emmanuel Macron, refers to the yellow vests. A chorus of journalistic cockatoos repeat in the media: "Seditious, factional, agitators, violent, 'casseurs' ... Then, when the yellow vests denounce the infamous, manipulative and to-the-orders-of-power-eared journalism, the journalists lament as unstained vestals : "Yellow vests attack press freedom" ...

However, one of the most obvious characteristics of the yellow vest, together with its determination, its capacity for sacrifice, its generosity and its humanism, is its will to act peacefully. As if to prove it, today, Sunday, the eve of Epiphany, the women in yellow vests went out to the street. Facing a cohort of police armed to the teeth for the urban guerrilla, they shout in unison: "Kiss me!" "Kiss me!" (A bisous! A bisous!).

The armed messengers of peace and order don't react and turn to their commander: "What do we do, boss?"

Yesterday, Saturday, Act VIII of the movement that shakes France to its foundations, the number of protesters doubled in relation to the previous Saturday, denying the government and the media claim –against all evidence– that the movement loses strength.

The yellow vests are a revolutionary, exemplary and historical movement. They go out to the street, they socially meet again and they remake society ... The poor person usually becomes tiny, lowers his voice and his neck, he lives as if apologizing for being there, blamed for his poverty by the winners, the experts, the ones who know, the wealthy and his servants. The yellow vest understood that he’s the people, and he remembered what he was taught in the public, secular and free school: "The French Revolution eliminated forever the social inequalities before the Law, and made the people the only sovereign". The yellow vest is the people, ergo ... it's sovereign.

Faced with the crisis of the regime, two paths emerge: some, the democrats, demand to expand, extend citizen rights, practice direct democracy. The citizen initiative referendum (RIC) translates the will of the people to decide whatever concerns them. Others, the authoritarians, bet on the providential man / woman who, imposing another order, his, restores to France the order and tranquility that is the delight of big money.

In this bifurcation, in this alternative, arises again, as in September 1789, the difference between left and right: the left fights against privileges, opposes them, declares them inadmissible. The right protects privileges, lives thanks to them, and justifies them by being of 'divine origin' or the prize of accumulated wealth by stripping the people.

Representative democracy? Yes, but as in the Athens of Pericles: brief mandate, non-renewable, revocable, controlled and without privileges.

The mass of servant journalists don’t understand. That's why they keep asking the yellow vests: "But ... what are your demands?"

Emmanuel Macron proposed "a great national debate". And he hastened to set the limits of the debate. "We can’t undo what we have already done," he declared, Jupiterian. Before insinuating the topics that in his opinion can be discussed.

The yellow vests, remembering once again the French Revolution, retort: "It is not the representative who sets the limits of the sovereignty of the represented. Why should our sovereignty be limited? With what legitimacy can someone limit the rights of citizens, who are, precisely, the source of legitimacy? "

"There are very technical issues", dares to argue some political scientist, a kind of sports commentator supplied with too many balls. The answer is immediate: "In politics there are no 'experts': we are all equal and we have all the right to a vote."

The deep thinking goes further: choosing is not voting. To elect means to designate a "deputy” who’s the one who votes everything in our name, regardless of our opinion. By electing him, we abdicate our own sovereignty for 4, 5 or 6 years.

The Constitution, which should protect the citizen, their freedoms and their rights, is actually a political prison that keeps us tied up. There is no article in the Constitution that openly denies the sovereignty of the people (excepted for the Chilean Constitution). But the Constitution states that the laws are voted by Parliament, not by citizens. The representatives, deputies and senators, vote laws that suit them and their bosses.

That fact, verified not only in France but throughout the world, is what leads the yellow vests to claim their right to control and to revoke the elected deputies. Because the deputies, the representatives, institute their own power, stripping the people of their sovereignty.

Étienne Chouard, a militant who thinks and makes you think, maintains that it is not a matter of going to the 6th Republic, but to the first democracy ... Until now the power of the oligarchy has prevailed, a privileged social sector that imposed suffrage as the best tool to preserve its power. For 25 centuries we have known that the tool of democracy is not the suffrage but the random draw*): Montesquieu, Rousseau and other great thinkers said it, before this great truth was conveniently hidden.

Étienne Chouard believes that this is not a democracy because, if one examines reality, the demos does not have the kratos.

In democracy, no financial power should own the media. In a democracy, the currency can’t be the private tool of big capital in the hands of a privatized Central Bank. Just as there is political sovereignty, there must be monetary sovereignty.

The citizen revolution of the yellow vests is not only alive, but also rests on a deep reflection about the type of society we should build.

What is no obstacle for the remote-controlled journalist to ask once again: "But ... what are your demands?"

The answer is simple. The yellow vests, that is to say the people, want to recover the kratos...

Donald Kagan, History teacher Yale University, wrote in his Pericles’s biography (Pericles of Athens and the Birth of Democracy, 1991) :

“In the years 450 bC, under the leadership of Pericles, the Athens Assembly voted a few Laws that made of their Constitution the most democratic tool of all times. That Constitution gave a direct and unquestionable power to the citizen’s constituency and to the popular Courts, whose decisions were adopted by simple majority. Most magistrates were designed by random draw, excepted for a few number of carefully selected people (specialist ones) that were designated by vote. All positions lasted for a short period of time, and every deputy was under a careful and rigorous public control.”

Posted by jan joost teunissen at 3:07 AM No comments: