My great-grandfather, Bernardo De Ferrante, was a doctor who was concerned about the health of the people of the village or area where he worked as a medico condotto, as a doctor for the poor, which was at Capri and in Naples.

Bernardo De Ferrante was friends with another doctor, Axel Munthe, who lived like him at Capri and worked in Naples during the cholera epidemic of 1884. Munthe came from Sweden and was equally concerned with poor people. He became famous because of a book he wrote about his experiences in Italy (and elsewhere): The Story of San Michele. It is an autobiographical account of his life and work.

Bernardo De Ferrante has not become famous. He is known to his relatives as the father, grandfather, great-grandfather or great-great-grandfather who died young, at age 38, and gave us this mysterious background of descending from the King of Naples.

Rather then following the footsteps of the King of Naples and his descendants I preferred to follow Bernardo de Ferrante's concern with the health of poor people. That's what I have done since I started working in agrarian reform in Chile during the Allende government in 1973, then for the Chile solidarity committee in the Netherlands (1974-78), subsequently for the Transnational Institute in Amsterdam (1979-86) and, finally, up till today, the Forum on Debt and Development (FONDAD).

All along this work for the poor (by focusing on international economic dynamics and power relations) during the past four decades, I have remained interested in the life of Bernardo De Ferrante. As he died in 1899 and there is very little known about his life, it's pretty difficult to get an idea of how he has lived and what he did as a physician. One of the last things I have done (yesterday) is making a short film about a meeting between Bernardo's daughter (my grandmother Nelly De Ferrante) and Axel Munthe, at Capri - Axel Munthe meets Nelly De Ferrante at Capri

Axel Munthe also became famous because of a film about his life -- see picture below. 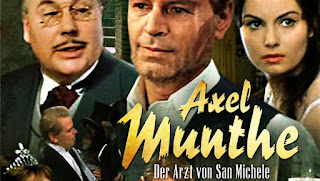 For those of you who do not understand Spanish and German, in the illustration at the top Munthe is being quoted saying that a man can live without hope, friends, books, even music, but only if he can listen to his own thoughts. The flyer of the film here above simply says it is about "The doctor of San Michele".
Posted by jan joost teunissen at 1:12 AM