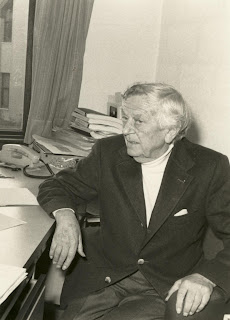 Before I get to the papers Andrew Sheng and John Williamson sent me, I'd like to quote from a conversation I had with Robert Triffin a long time ago.

Entering Triffin’s room at the University of Louvain-la-Neuve on that crisp, blue-sky morning of 30 January 1985, I saw papers piled up everywhere, making me feel at home immediately. Triffin asked, "Why don't you have anymore in the Netherlands people like Jan Tinbergen? Where are the new Tinbergens?"

I tried to answer his question, prompting Triffin to observe, “People tend to be too conformist. Economists, by trying to explain the policies that happen, tend to whitewash and justify them.”
“Why?” I asked.
“They want to be ready to move from academics to political jobs.”

I don’t think that is the only, or major reason for being conformist… Anyway, let’s turn to Andrew and John, and see if they are "whitewashing and justifying" the policies that led to the international credit crisis.

In his paper, John blames the supervisors. “The prime responsibility for the financial turbulence that is currently afflicting much of the world is to be found in inadequate supervision. The authorities welcomed the process of financial intermediation, rather than recognizing its dangers and imposing rules that would have provided a counterweight to the greed that drives the private financial sector.”

Andrew, on the other hand, himself a former financial regulator, recognises that regulators do share some of the blame, but thinks that their problem is that they lack understanding of what happened in the financial markets. And, he observes, they may have contributed to the emergence of crisis by providing a too stable financial environment. “Prolonged stability of values of risks, liquidity and prices may lull market participants into leverage behaviour that escalates until the system becomes more and more unstable.”

In a subsequent discussion by email, Andrew stressed he does not think it is fair that regulation is to bear the brunt of the blame. “Regulators do not create bubbles and individually, there is very little that they can do to stop them appearing. Central bankers, on the other hand (and I am a former central banker) have a lot of responsibility on that front, but the prevailing mood is that they can't predict them nor can they determine when they can peak, so they prefer to deal with the aftermath.”

I think Robert Triffin would have loved to participate in the debate. Would he have accused John or Andrew of whitewashing and justifying the policies that led to the international credit crisis?

(to be continued)
Posted by jan joost teunissen at 12:34 AM

As always I have greatly enjoyed reading John's paper. Beautifully written and with a typically clear British mind. I very much agree with his concerns and worries as well as with the brunt of his recommendations. To me, his paper is mainly about international cooperation even though his analysis of the finacial crisis is also to the point and illuminating. Nevertheless, I would venture to suggest that the problems are more complex than just problems of supervision.

I am still searching in my own mind for the "true" origins of the "sub-prime mortgage crisis". I am inclined to reach the following conclusions: (1) The problem originated to a large extent in the financial sector. Here I fully share John's own conclusion. (2) But in cotrast to John, I also believe that the financial crisis is also a problem of global imbalances, something I will try to outline below.

In the financial sector we have faced a multiplicity of mishaps. First, there is a clear problem of distorted incentives in the sector - huge rewards for profits, little if any penalties for losses. As Paul Krugman says - " heads I win, tails you lose", i.e. a completely perverse system of financial rewards.
Second, there seems to me a problem of accounting rules. If banks can do massive operations off-balance sheets,as John and others have pointed out, this seems to me to be asking for trouble. I am obviously missing some point but I would love to understand the logic of regulators to permit those operations on the first place and such a scale.
Third, credit rating agencies have obviously performed a "marvellous" job of assesing the risks from exposure to all those SIV, if I may be allowed to be a bit facetious. This is not the first time that they have done us a great deal of disservice, but they have surely been helpful to those financial institutions which have been benefited from those operations in the early phases.
Fourth, regulators are in my mind also to be blamed for the mess. While I fully agree with Andrew that regulators have not created the bubbles it is perfectly plausible that they have nevertheless accentuated the problem by not moderating it or even stopping it earlier.
Finally, there is also the question of bad investment decisions of households. If corporate investors make bad decisions they lose money. If households become as greedy as bankers and decide to borrow for their third or even fourth house in the anticipation of rising prices should they not also feel the pain?

Now, let me turn to the second origin of the crisis as I see it - the global imbalances. The reason why I believe that global imbalances are also to be blamed is that they allowed/accentuated/stimulated the Fed in pursuing low interest rate policy for far too long. The US current account deficit and its external financing has produced a situation of an "excessive" liquidity in the banking sector which allowed the massive expansion of credit for private equity deals, prime and sub-prime mortgages, financing of SIV, in addition to standard credits to the corporate and household sectors. As a result we found ourself in the bizarre situation in which an "excess liquidity" existed in parallel with "liguidity shortage". The "excess liquidity" was related to easy money policy as well as capital inflows. The liquidity shortage appeared when banks liguidity dried up due to financial losses on their operations.

If I am right just a little bit, it would seem to me that a better supervision, as John has proposed, would definitely help. However, would it fully address the problem that we are discussing? I am afraid not. Much more would be required - but I do like his proposal for more international cooperation. Without the latter there will be strong incentives to pursue carry trade and the world will also be full of "free riders."