Did Varoufakis say "fuck you" to Schaeuble and Dijsselbloem? (2) 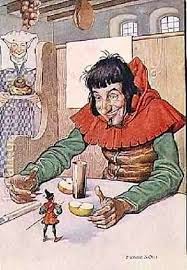 In the dialogue I'm having with a friend from the FONDAD Network about the struggle between Greece (Little Thumb) and the Troika (The Giant), my friend has written the following:

"I should not have used that F-word but in a way you seem to end up saying the same thing. Varoufakis comes to these meetings without a touch of humility which I think bothered me. You may ask why he should be like that - only because the country has signed agreements which should be honored. The country (not Varoufakis) made huge mistakes in the past which should be recognized (massive tax evasion, serious corruption, bizarre tax code, massaging data and lying about them, wasted public expenditures - Olympics! etc.)  as a starting position to negotiate concessions from the creditors. If the creditors were not listening, it is most likely because they felt that Varoufakis was simply "demanding" and not negotiating. And as we see, he still has not "delivered".

I do not have much sympathy for the creditors but the problem is with the system which allows them to be so demanding and irresponsible. The assessments of credit worthiness by credit agencies has been poor and so was the assessment by the EC. Neither EC nor ECB had enough powers to do an effective bank supervision. When the hell broke loose, neither the EC or ECB had the mechanism and skills to deal with the debt crisis without the help of the IMF. The IMF program was fairly "classic" - relatively short term with the weight of responsibility put on the debtor. There is no provision for an orderly process of "bankruptcy" which quite clearly was and is needed to deal with the problem of Greek debt. So, this takes me to the subject that we have discussed many times at FONDAD - global governance, global governance, global governance.

In addition, there is a problem of timing. Any special deal for Greece will be poorly seen by countries like Spain, Ireland and Portugal which have gone through their drastic adjustments (and recessions). Not surprisingly, the biggest opponents of a special deal for Greece are precisely those countries as well as other "poor" members such as Slovakia."
Posted by jan joost teunissen at 12:21 AM