A Blueprint for Reform of the International Monetary System (1) 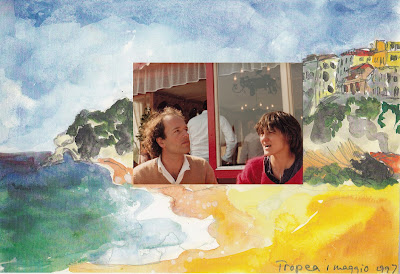 I hesitated where to put this strange picture of Tropea in which my wife and me are inserted by coincidence (by having left a photo in the scanner when I scanned the painting by Aafke), in this blog or in my other blog, "Tutto e possibile".

I decided to put it here as I am thinking in English (and not Spanish, French or Italian which I do when writing on the other blog) reading at this moment a highly interesting paper Jan Kregel sent me, "Emerging Markets and the International Financial Architecture: A Blueprint for Reform".

I will let you know in a next post why I like this paper by Jan Kregel.

To this post I would only like to add that my search for ways to solve problems of the poorer part of the global community - which, unfortunately, is a large majority, whereas the decision makers among a small minority of rich people determines to a large extent their fate - and my thoughts about a better global financial system were stimulated in the 1970s and 1980s and afterwards by interviewing, in Spanish language, Latin American people: campesinos, social scientists, politicians.

Probably my ability to speak Spanish has been facilitated by having a grandmother from Naples whose first language was Italian (she spoke with the accent of Naples), and having a great-grandfather (the father of my nonna) who came from a small village nearby Tropea in Calabria (the far south of Italy).

Both my Italian grandmother and my mother (and my sister who lives in the south of France) have studied French. I learned it at school and, more than anything else, being in France and Marocco. And, for sure, by reading novels in French. I start the day by reading google news in French before I switch to other languages.

The painting above was made by my wife, Aafke Steenhuis, on our first trip to Tropea. I inserted the picture after the coincidental inclusion in a slightly different way so that it nicely fitted with the cliff on which Tropea has been built.
Posted by jan joost teunissen at 10:13 PM