I cried over the death of Robert Triffin 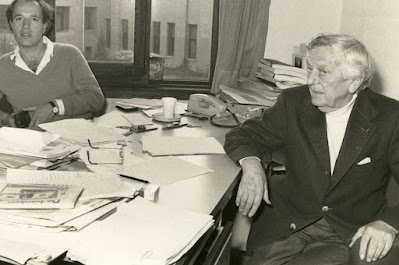 Robert Triffin is the only economist in my work circle for whom I cried, with real tears that broke from my eyes and rolled down my cheeks, first in the street Noordeinde in The Hague, where a friend was telling me on that sunny day in Spring of 1993, casually, that Triffin had died, and soon thereafter in the director's room of FONDAD at Noordeinde.
When I got home to Amsterdam, that same night I wondered why I had been crying. The answer I gave to myself was that Robert Triffin and I were united in our desire to improve the world - focusing on the role of money, of finance, in the world.
But I think there were still other, perhaps more important, reasons why I was crying...
And there is another economist in my work circle that I cried for, with real tears, on 21 September 1976: Orlando Letelier.

Posted by jan joost teunissen at 3:12 AM