Why should we have listened better to Robert Triffin? 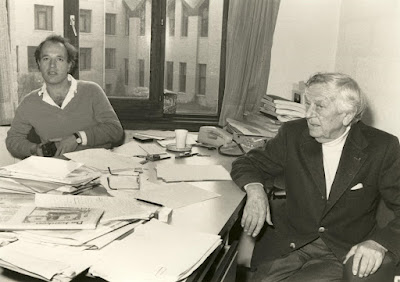 I wrote the following to my friends of the Fondad Group:

I would like to add this speech to my previous message:

“Why should we have listened better to Robert Triffin?” Speech by Jan Joost Teunissen at conference, “The economic and financial crisis of 2008-09”, Louvain-la-Neuve, 7-8 May 2009
There are various reasons why we should have listened better to Robert Triffin’s suggestions of how to fundamentally reform and improve the functioning of the international monetary system. He made those suggestions for the first time in 1957, in his Europe and the Money Muddle, and continued making them until a year before his death in 1993, when he withdrew from all public economic activities. I will discuss two major reasons, the first concerned with the world economic and political system, and the second with the role of economists.
A more stable system plagued less by crises The first and main reason why we should have listened better to Robert Triffin’s suggestions for reform and improvement of the international monetary system is that the world would have been more stable and would have been plagued less by crises. Those crises have proven to be very harmful for businesses and citizens. In 1985, three years after the world debt crisis broke out in Latin America, and led to what Latin Americans have called ‘the lost decade’, Triffin once again advocated fundamental reform of the international monetary system, just like he had done energetically during the sixties and seventies. He did so in a report that he prepared for a US Congressional Summit on Exchange Rates and the Dollar. He said, and I quote, “We should resume negotiations for a fundamental reform of the world monetary system - or non-system - that is anchored primarily on a national, paper reserve currency, that is, the dollar.” In the view of Triffin, a key element of such fundamental reform would be to anchor the system on a truly international reserve asset held with the IMF, and not on the dollar or any other national currency used as a reserve currency. Triffin mentioned three major arguments why fundamental reform of the system was needed. First, and I quote his 1985 paper prepared for the US Congressional Summit, “because of its fantastic inflationary proclivities, leading to world reserve increases eight times as large over a brief span of fifteen years as over all previous years and centuries since Adam and Eve.” Second, “because of its skewed investment pattern of world reserves, making the poorer and less capitalized countries of the Third World the main reserve lenders, and the richer and more capitalized industrial countries the main reserve borrowers of the system.” In another paper Triffin said the same in stronger words. I quote from his September 1988 acceptance speech of the Seidman Award, “the richest, most developed, and most heavily capitalized country in the world should not import, but export, capital, in order to increase productive investment in poorer, less developed, and less capitalized countries. I have long argued that our international monetary system is at the root of this absurdity.” And third, “because of its crisis-prone propensities reflected in the amplitude of the present world debt problem.” ...

TO READ FURTHER, see the attached.