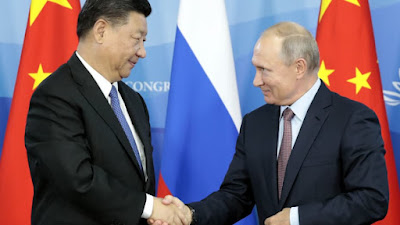 An effect not anticipated by NATO policy makers is that China and Russia will speed up Reform of the International Monetary System, argues Michael Hudson:

But nobody thought that it would happen this fast.

Empires often follow the course of a Greek tragedy, bringing about precisely the fate that they sought to avoid. That certainly is the case with the American Empire as it dismantles itself in not-so-slow motion.

The basic assumption of economic and diplomatic forecasting is that every country will act in its own self-interest. Such reasoning is of no help in today’s world. Observers across the political spectrum are using phrases like “shooting themselves in their own foot” to describe U.S. diplomatic confrontation with Russia and allies alike.

For more than a generation the most prominent U.S. diplomats have warned about what they thought would represent the ultimate external threat: an alliance of Russia and China dominating Eurasia. America’s economic sanctions and military confrontation has driven them together, and is driving other countries into their emerging Eurasian orbit.

American economic and financial power was expected to avert this fate. During the half-century since the United States went off gold in 1971, the world’s central banks have operated on the Dollar Standard, holding their international monetary reserves in the form of U.S. Treasury securities, U.S. bank deposits and U.S. stocks and bonds. The resulting Treasury-bill Standard has enabled America to finance its foreign military spending and investment takeover of other countries simply by creating dollar IOUs. U.S. balance-of-payments deficits end up in the central banks of payments-surplus countries as their reserves, while Global South debtors need dollars to pay their bondholders and conduct their foreign trade.

This monetary privilege – dollar seignorage – has enabled U.S. diplomacy to impose neoliberal policies on the rest of the world, without having to use much military force of its own except to grab Near Eastern oil.

The recent escalation U.S. sanctions blocking Europe, Asia and other countries from trade and investment with Russia, Iran and China has imposed enormous opportunity costs – the cost of lost opportunities – on U.S. allies. And the recent confiscation of the gold and foreign reserves of Venezuela, Afghanistan and now Russia, along the targeted grabbing of bank accounts of wealthy foreigners (hoping to win their hearts and minds, along with recovery of their sequestered accounts), has ended the idea that dollar holdings or those in its sterling and euro NATO satellites are a safe investment haven when world economic conditions become shaky.

So I am somewhat chagrined as I watch the speed at which this U.S.-centered financialized system has de-dollarized over the span of just a year or two. The basic theme of my Super Imperialism has been how, for the past fifty years, the U.S. Treasury-bill standard has channeled foreign savings to U.S. financial markets and banks, giving Dollar Diplomacy a free ride. I thought that de-dollarization would be led by China and Russia moving to take control of their economies to avoid the kind of financial polarization that is imposing austerity on the United States. But U.S. officials are forcing them to overcome whatever hesitancy they had to de-dollarize. (...)


TO READ FURTHER - http://www.defenddemocracy.press/michael-hudson-the-american-empire-self-destructs/
Posted by jan joost teunissen at 5:07 AM