Robert Triffin: "Most economists are demagogues" 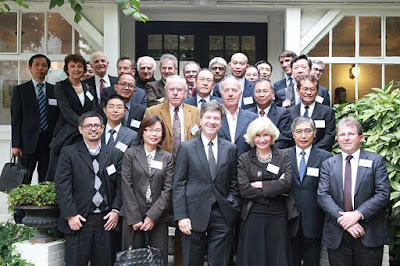 I have a niece in Wien (Vienna) who is an economist. She put a nice article on her facebook page about the need to clean up your house when it is crowded with stuff that you have hoarded and do not need. I read the article, which prompted me to give this comment:

"I have started throwing things away - if they could not switch ownership - about 14 years ago including books of which the antiquair (antiquarian?) opposite to my office in The Hague said he could have sold them a few years before but not anymore now - they included books I had inherited from opa Blink. So that was a good start.

How did I follow up? By realising that not all valuable stuff would fit into my room - the room you have been in when we looked at old family photos.

What progress have I made? Quite substantial, but not yet enough. How to speeden up before I die? By being rigourous and trying to shift ownership of my stuff...

Maybe the last thing is what the rich should do to reduce unequalIty, or the divide between rich and poor. Yes, indeed, more should be done to breach the divide, but this may be a good start.

How to do that? Well, it's not so difficult, progressive tax is one obvious instrument. There are more instruments.

During many years I was surprised the main criterion for success of economic policy was not the well-being of the citizens... but something economists considered important. But then a famous economist, Robert Triffin, told me what I knew already: economists tend to be conformists and many of them, including Triffin's friends, helped to wash white what was dirty."

"To end my comment, let us, economists, do a sane washing by advising governments to make society healthy instead of continuing the white-washing and claiming success for neoliberal policies.

And let us change the training of economists. And let us be more honest with ourselves as social scientists.

Economics is just one of the social sciences, like psychology and cultural anthropology. Would any psychologist or cultural anthropologist dare to prescribe how citizens should behave? Or would he or she dare to dream that one day that would happen? And would they then still consider themselves "scientists"?

And would they be happy that people behaved the way they wanted?"

- You can read Triffin's remarks here: Robert Triffin: "Most economists are demagogues"

and here: Robert Triffin: "Most central bankers and economists are demagogues"

Posted by jan joost teunissen at 1:38 AM