Why many Dutch don't vote Dijsselbloem and his Labour Party (and do Greeks still trust Euclid Tsakalotos?)

Many Dutch who considered voting at the general elections of 15 March for the Labour Party (Partij van de Arbeid) have decided not to do so when they knew the Labour Party had put Dijsselbloem third on the list.

The main reason for not supporting the Labour Party is that Dijsselbloem has shown, as Chair of the Eurogroup, he is a neoliberal rather than a social democrat. In particular, he has shown this in his policy towards Greece. Instead of supporting the newly elected social democratic government of Tsipras, that in 2015 gave hope to Greeks, he arrogantly supported the neoliberal diktat of Greece's creditors who forced Greece to privatise (sell state property to foreign investors), cut back on public spending and 'reform' pensions and the labour 'market'.

Another reason why many Dutch do not vote for Dijsselbloem's Labour Party is that they see him as an obedient servant of Germany's minister of finance Schaeuble.

But I'd like to stress that Schaeuble's thinking is the same as that of many Dutch and German officials. So for me Dijselbloem is the typical minister of finance who faithfully follows the neoliberal dogmas and interests.

I am afraid the current Greek minister of finance, Euclid Tsakalotos, is doing the same, even though he was critical about so-called labour market reform in an interview last year. This is what he said (I think more as an intellectual than as minister of finance) to Euronews on 14 June 2016: 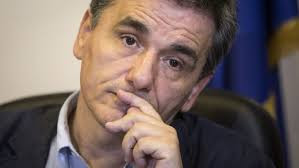 REFORMING THE LABOUR MARKET
Efi Koutsokosta:
“We see now in France that the government is trying to pass an unpopular labour reform and we see people in the streets demonstrating. Are you with the people demonstrating or with the French government that recently has become a very good friend of yours?”
Euclid Tsakalotos:
“Well, this is an issue that all countries will have to face, labour market reforms. I am not convinced that Europe is not doing well because of labour market inflexibility. We’ve been hearing this for very many decades. There have been a lot of moves to improve labour flexibility which have had little effect on employment.
In general, for instance, in Greece the institutions [that is, Dijsselbloem, Schaeuble and the others of the so-called Troika] are going to ask us to make firing more easy but we know and, as you know, I am an academic economist, the evidence is actually not there that if you make firing easier, you will get lower unemployment. What you do get is the same employment but with increasing insecurity for workers”.

However, yesterday (Monday 20 Feb) Tsakalotos agreed at a meeting of eurozone finance ministers chaired by Dijsselbloem that Greece’s bailout inspectors are returning to Athens to seek changes to the country’s tax, pensions and labour market laws, thus giving way to European pressure for deeper reforms. Who in Greece still have confidence in Tsipras and Tsakalotos?
Posted by jan joost teunissen at 11:58 PM