Why did the Troika not resolve the Greek debt problem? 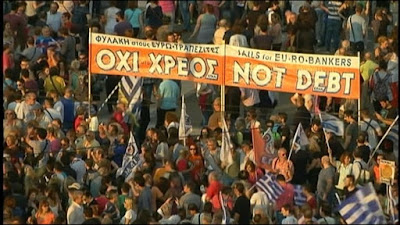 I get tired and angry when I read once again that the Troika of financial policy makers (ECB, Eurogroup, IMF) have not yet resolved the foreign debt problem of Greece (see e.g., http://www.cnbc.com/2017/01/27/greece-must-step-up-reforms-or-risk-losing-imf-support.html).
It's a shame they still dare to bother us with a problem they should have resolved long ago. It's a shame we do not have more capable policy makers including, and especially, given his responsibility as chair of the Eurogroup, Dutch minister of finance Jeroen Dijsselbloem. They should have resolved Greece's foreign debt problem in 2010 when it was discussed by the IMF.
One of the executive directors of the IMF who then (in 2010) saw the Greek debt problem in the right perspective and criticised his colleagues for getting onto an unhealthy and economically unsound path of lending money to Greece presumably to help it resolve its foreign debt problem but, in practice, helping it to increase its foreign debt problem and helping the banks to get payments on loans they had extended to Greece, was Brazilian economist Paulo Nogueira Batista. "The first program of 2010 was presented as a bailout for Greece, but in reality was more a bailout of the private creditors of Greece," observed Nogueira Batista.
On this blog I wrote a post about him, which happens to be one of the most-read posts (and from which I copied the quote of him): Remarkable interview on Greek debt with IMF executive director Paulo Nogueira Batista.

The unthoughtful and shameful policies of western policy makers vis-à-vis a small country like Greece reminds me of the equally shameful and unthoughtful policies they applied to so-called highly indebted poor countries (HIPCs). Once I was asked by the Dutch Ministry of Foreign Affairs to organise a workshop in order to help resolve the HIPCs foreign debt problem and this is what I said in my opening speech:

When I was asked in early summer of 2002 by officials of the Dutch Ministry of Foreign Affairs whether I was willing to organise an international workshop on how debt relief for heavily indebted poor countries (HIPCs) could be made more effective, my first thought was: “Gosh, why did they let this problem drag on for so many years? They should have resolved it long ago!”
In my opening remarks to the workshop in August 2002, I hinted at my spontaneous (but silenced) outcry in somewhat more diplomatic, but still provocative, terms, saying that I hoped the Forum on Debt and Development (FONDAD) would not be asked in three years time to organise yet another workshop on how the HIPC Initiative could be made more effective.
“The Initiative should just achieve what it is meant to do: get rid of the debt problem,” I stressed.
During the coffee break, one of the Ugandan participants came to me and said with an ironic smile “You have been pretty tough with us.”
“No,” I answered, amused, “I wasn’t blaming you so much, but rather the officials in the rich countries.”

You can read my opening speech in this book, Fondad-HIPC-BookComplete HIPC Debt Relief: Myths and Reality, on pages 1-10. It has interesting lessons for how the Greek debt problem should have been resolved instead of letting it drag on and increase.
Posted by jan joost teunissen at 12:20 AM