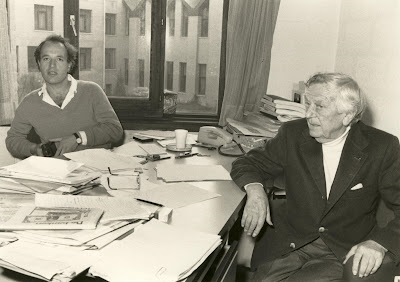 In the mid-1970s, I began to read literature on international finance, mainstream journals like Euromoney, Institutional Investor and newspapers like the Financial Times, and alternative journals such as Development Dialogue (Sweden) and many journals in Spanish and French – as a necessary counterweight to Anglosaxon mainstream thinking and because I like to read and speak Spanish and French.

In the mid-1980s, I was able to create an international forum to discuss the functioning of the international monetary system and the debt crisis, the Forum on Debt and Development (FONDAD). I established it with the view that the debt crisis of the early 1980s was a symptom of a malfunctioning, flawed system – see, for example, my article “The International Monetary Crunch: Crisis or Scandal?”, Alternatives, Volume XII, No. 3, July 1987. (We will put it on FONDAD's website).

A few weeks ago my assistant Adriana and I started moving our office to Amsterdam (headquarters) and Rotterdam (book sales). Thousands of papers, journals, letters and books passed through my hands. My fingers are dry and hurt, and I am exhausted by the selection process.

I have thrown away most of the literature on international finance I had stored and filed over 30 years, not through the window but as old paper to be recycled, to create room (espacio) and stimulate fresh thoughts. Valuable articles and books remained such as those of Robert Triffin.

The picture above shows Robert Triffin and me, in his room at the Université de Louvain-la-Neuve in Belgium, during one of our long conversations in the early 1980s.

Going through the thousands of papers in my old office I found interesting letters and papers whose existence I had forgotten. In next posts I will tell about them. One thought I had when going through the dust of old stuff is that the past harbours interesting ideas for the future.

Nonetheless, I was able to throw away a lot, creando espacio para nuevos pensamientos.
Posted by jan joost teunissen at 12:30 AM