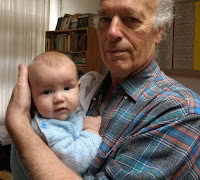 Last night a friend of mine, a flamenco guitarist, said he was worried about the future of the world. He thinks that the dramatic extinction of the species and climate change will not be stopped. He is also concerned that China will first conquer the world economically and then politically and promote authoritarian and repressive regimes in Europe.

I said that I kept my optimism that we can do something instead of waiting for the worst to come, and that I had to stay optimistic because I have children and grandchildren who I love living in a beautiful world.

The next morning I received a long letter from a friend who lives in India and who I asked what he thought of my article about China and Europe that I published on this blog (Europe should see China as an ally).

My Indian friend said: "I liked your piece on Europe and China. It exuded all your ingrained friendliness, optimism about human and country relationships, presumption that all countries operated on sound, sensible lines and principles and saw value in cooperating rather than confronting one another in addressing the core, key issues of the day and the future -- especially the transformation of the world's economy and business model toward a greener future."

And then my friend explained, in a detailed way, why he did not share my optimism about China. One of the things he said was:

"China sees Europe as a waning, decadent region that is gorged on material consumption beyond its needs but with the capacity and desire to serve China's interests for eventual hegemonic power. It does not see Europe as a competitor but as a collaborator on China's terms. It sees European society as flatulent and unconcerned about anything other than maximizing its own immediate well-being and pleasure. The welfare state that Europe has created, and which has evolved considerably over that last fifty years, is not something China admires or wishes to emulate or propagate because it considers such a 'something-for-nothing' approach to welfare to be demeaning to the human spirit, creating permanent dependencies which must be avoided."

I am very happy with the long letter from my Indian friend and wonder what I will answer him.
Posted by jan joost teunissen at 10:56 PM