The Dutch Have Solutions to Rising Seas. The World Is Watching. 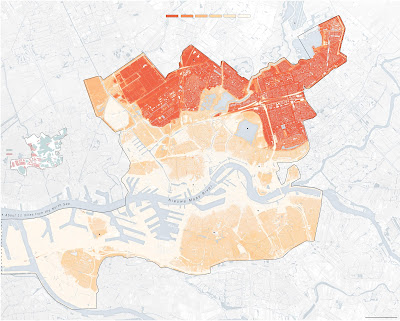 I read an interesting article about Rotterdam and the Netherlands in the New York Times of which I will copy the first paragraphs below. I read it because of a a conversation I had with the director corporate strategy of the Port of Rotterdam. In preparing the interview I read a couple of articles and power point presentations about Rotterdam and the Paris Climate Agreement. Very interesting stuff!

In the waterlogged Netherlands, climate change is considered neither a hypothetical nor a drag on the economy. Instead, it’s an opportunity.

The Dutch Have Solutions to Rising Seas. The World Is Watching.

ROTTERDAM, the Netherlands — The wind over the canal stirred up whitecaps and rattled cafe umbrellas. Rowers strained toward a finish line and spectators hugged the shore. Henk Ovink, hawkish, wiry, head shaved, watched from a V.I.P. deck, one eye on the boats, the other, as usual, on his phone.
Mr. Ovink is the country’s globe-trotting salesman in chief for Dutch expertise on rising water and climate change. Like cheese in France or cars in Germany, climate change is a business in the Netherlands. Month in, month out, delegations from as far away as Jakarta, Ho Chi Minh City, New York and New Orleans make the rounds in the port city of Rotterdam. They often end up hiring Dutch firms, which dominate the global market in high-tech engineering and water management.
That’s because from the first moment settlers in this small nation started pumping water to clear land for farms and houses, water has been the central, existential fact of life in the Netherlands, a daily matter of survival and national identity. No place in Europe is under greater threat than this waterlogged country on the edge of the Continent. Much of the nation sits below sea level and is gradually sinking. Now climate change brings the prospect of rising tides and fiercer storms.

From a Dutch mind-set, climate change is not a hypothetical or a drag on the economy, but an opportunity. While the Trump administration withdraws from the Paris accord, the Dutch are pioneering a singular way forward.

It is, in essence, to let water in, where possible, not hope to subdue Mother Nature: to live with the water, rather than struggle to defeat it. The Dutch devise lakes, garages, parks and plazas that are a boon to daily life but also double as enormous reservoirs for when the seas and rivers spill over. You may wish to pretend that rising seas are a hoax perpetrated by scientists and a gullible news media. Or you can build barriers galore. But in the end, neither will provide adequate defense, the Dutch say.
And what holds true for managing climate change applies to the social fabric, too. Environmental and social resilience should go hand in hand, officials here believe, improving neighborhoods, spreading equity and taming water during catastrophes. Climate adaptation, if addressed head-on and properly, ought to yield a stronger, richer state.
This is the message the Dutch have been taking out into the world. Dutch consultants advising the Bangladeshi authorities about emergency shelters and evacuation routes recently helped reduce the numbers of deaths suffered in recent floods to “hundreds instead of thousands,” according to Mr. Ovink.
“That’s what we’re trying to do,” he said. “You can say we are marketing our expertise, but thousands of people die every year because of rising water, and the world is failing collectively to deal with the crisis, losing money and lives.” He ticks off the latest findings: 2016 was the warmest year on record; global sea levels rose to new highs.
He proudly shows off the new rowing course just outside Rotterdam, where the World Rowing Championships were staged last summer. The course forms part of an area called the Eendragtspolder, a 22-acre patchwork of reclaimed fields and canals — a prime example of a site built as a public amenity that collects floodwater in emergencies. It is near the lowest point in the Netherlands, about 20 feet below sea level. With its bike paths and water sports, the Eendragtspolder has become a popular retreat. Now it also serves as a reservoir for the Rotte River Basin when the nearby Rhine overflows, which, because of climate change, it’s expected to do every decade.

Sign up to receive our in-depth journalism about climate change around the world.
Opt out or contact us anytime.
The project is among dozens in a nationwide program, years in the making, called Room for the River, which overturned centuries-old strategies of seizing territory from rivers and canals to build dams and dikes. The Netherlands effectively occupies the gutter of Europe, a lowlands bounded on one end by the North Sea, into which immense rivers like the Rhine and the Meuse flow from Germany, Belgium and France. Dutch thinking changed after floods forced hundreds of thousands to evacuate during the 1990s. The floods “were a wake-up call to give back to the rivers some of the room we had taken,” as Harold van Waveren, a senior government adviser, recently explained.
“We can’t just keep building higher levees, because we will end up living behind 10-meter walls,” he said. “We need to give the rivers more places to flow. Protection against climate change is only as strong as the weakest link in the chain, and the chain in our case includes not just the big gates and dams at the sea but a whole philosophy of spatial planning, crisis management, children’s education, online apps and public spaces.” TO READ FURTHER, click HERE
Posted by jan joost teunissen at 11:11 PM