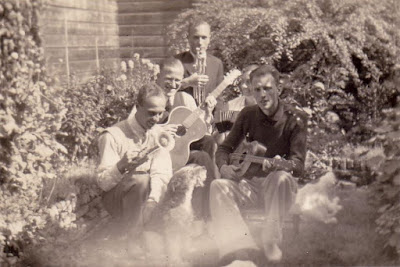 Last night, driving back home from Groningen, I told my wife (Aafke Steenhuis) that my memory capacity is now better than when I was young, because I trained it in my work as a researcher, journalist and activist in the seventies and eighties, and as the director of FONDAD from 1987 until now.
After having moved the FONDAD office from The Hague to Amsterdam (in 2008) I trained my memory capacity even more during my morning walks to Schellingwoude Locks. In those walks, ideas sprang up that I tried to remember by memorizing the first word or phrase.


I continue to challenge my memory capacity when ideas come up in bed at night or in the early morning hours when I am writing about an idea and do not make a note of the other ideas that have sprung up. I try to memorize them and if I can not remember them later ... I treat them as unimportant ideas.

It's more than a trick. It is a pleasure.

PS: My father's band from the 1930s (he was about 20 years old) was called "Herman Tennyson and His Pleasure Providers". There is an old gramophone record (78 laps) of his band in which they play two pieces, "Tango des Roses" and "Marêva". Clicking on the link below you can hear the music of "Marêva" played by my father's band in the 1930s. My father plays the trumpet.


Tunquén and my father's band

Posted by jan joost teunissen at 8:29 AM