Dijsselbloem and Varoufakis defend the Euro 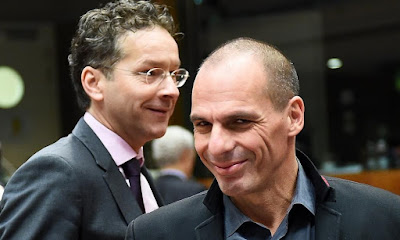 Are Dijsselbloem and Varoufakis demagogues because they both defend the euro?

What do you think?

And do you think that both Dijsselbloem and Varoufakis defend the euro by "making a proper, rational analysis"? (quoting my previous post)

And isn't the euro "causing recurrent crises that hurt the poor"? (quoting again my previous post)

PS: For Varoufakis's defence of the euro see, for example, his modest proposal for resolving the euro crisis, and the 16 October 2015 article in FxStreet, Yanis Varoufakis On Tour: A Pan-European Plan to Fix the Eurozone. With respect to Dijsselbloem's view, you may like to read his 31 May 2013 speech given in Greece, The challenges of the euro area, and his 15 January 2015 speech in Seoul, Speech by Jeroen Dijsselbloem at the global trade forum in Seoul.
Posted by jan joost teunissen at 3:45 AM