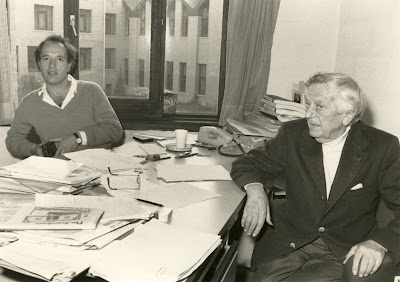 With a friend who belongs since long to the Fondad Network (John Williamson)  I had a discussion on the austerity debate (see, for an interesting article, "Paul DeGrauwe and the Rehn of Terror" by Paul Krugman).

In one of my letters I said:


"Following up on the austerity debate, I see a serious neglect of the world system aspect of the crisis in most analyses, in both the euro crisis and the international crisis. Rather than focusing on the way the crisis has emerged and developed, the debate focuses completely on the worrisome level of government debt, "inflexible" labour markets, and insufficiently regulated and supervised banks -- to name three features that experts, politicians and journalists discuss endlessly.

A second flaw in the debate about the (euro) crisis is that most experts, politicians and journalists reduce the debate to policies that they see as adequate responses to the crisis. So they present austerity as the solution to the government debt problem, "reform" of labour markets (i.e. reducing wages and making it easier to fire workers) as the solution to the problem (what exactly is the problem?) of inflexible labour markets, and better regulation and supervision as the answer to the problem of having to bail out banks.

I have long hoped for a more serious discussion of the crisis that would have departed from how the crisis emerged and developed in the international capitalist system. As you know, it started in some weak, sensitive parts of the system, spread to other parts of it, and ended up in creating, among other, the euro crisis. A serious analysis of the crisis would have suggested other responses than the current ones. Current policy responses are basically geared at crisis management instead of crisis resolution and crisis prevention.

I find it depressing and a shame that most analyses are superficial, flawed and misdirected. In such way it will be difficult, if not impossible, to resolve the crisis and prevent future crises.

Finally, I think that we should analyse the crisis not only from an economic point of view but also from a political and (socio) psychological point of view. Otherwise, we will not come up with proper responses."

The picture above is of Robert Triffin and me, taken during an interview I had with him in 1985 at his room at the University of Louvain-la-Neuve. I have written several articles about Triffin, when he was still alive and active, and after he passed away in 1993. In my bio as member of the board of the Triffin Foundation you can read a little bit of how important Triffin has been for me, and still is.
Posted by jan joost teunissen at 11:18 PM