Capitalism is a Shame


The case of Argentina’s default shows it again: capitalism is a shame. Argentina has been declared in default, but the default is with them, the finance people ruling the world, supported by a judicial system that defends their interests.

Here is a report from Reuters:

Argentina braces for market reaction to second default in 12 years 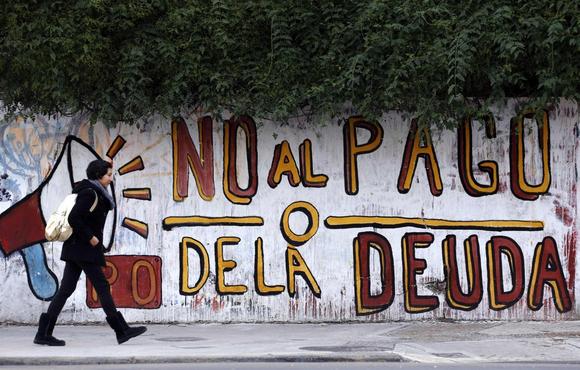 (Reuters) - Argentina defaulted for the second time in 12 years after hopes for a midnight deal with holdout creditors were dashed, setting up stock and bond prices for declines on Thursday and raising chances a recession could worsen this year.
After a long legal battle with hedge funds that rejected Argentina's debt restructuring following its 2002 default, Latin America's third-biggest economy failed to strike a deal in time to meet a midnight deadline for a coupon payment on exchange bonds.
Even a short default will raise companies' borrowing costs, pile more pressure on the peso, drain dwindling foreign reserves and fuel one of the world's highest inflation rates.
"It is going to complicate life for businesses like YPF which were going to look externally for financing," said Camilo Tiscornia, a former governor of Argentina's central bank. State-controlled energy company YPF (YPFD.BA) needs funds to develop Argentina's huge Vaca Muerta shale formation.
Argentina had sought in vain to win a last-minute suspension of a ruling by U.S. District Judge Thomas Griesa in New York to pay holdouts $1.33 billion plus interest. He ruled Argentina could not service its exchange debt unless it paid holdouts at the same time.
A proposal for Argentina banks to buy out the hedge funds' non-performing debt also fell through, sources told Reuters.
"This is a very particular default, there is no solvency problem, so everything depends on how quickly it is solved," said analyst Mauro Roca of Goldman Sachs.
As dire as it is, the situation is a far cry from the mayhem following the country's economic crash in 2001-2001 when the economy collapsed around a bankrupt government. Millions of Argentines lost their jobs.
This time the government is solvent. How much pain the default inflicts on Argentina, which is already in recession, will depend on how swiftly the government can extricate itself from its obligations.
Buenos Aires had argued that agreeing to the hedge funds' demands to pay them in full would break a clause barring it from offering better terms than those who accepted steep writedowns in the 2005 and 2010 swaps.
However, that clause expires on Dec. 31, after which the government would be able reach a deal with the funds. Many investors and economists still hope for a separate solution before then between the holdouts and private parties.
"Our base case is that a default would be cleared by January 2015," said Alberto Bernal, a partner at Miami-based Bulltick Capital Markets. He projected that a default would cause the economy to shrink 2 percent this year compared with a previous market consensus for a 1 percent contraction.
Failure to strike a deal will not cause financial turmoil abroad because Argentina has been isolated from global credit markets since its 2002 default on $100 billion, but domestic markets that had rallied on hopes of a deal in recent days will probably reverse course.
Yields on Argentina's key dollar bond due 2033 fell to the lowest level in about three and a half years on Wednesday, and the country's MerVal index .MERV hit a record.
"The correction will depend on perceptions of how long the default will take to solve," said Roca.
HOW DIRE A DEFAULT?
The default could get much messier and take longer to clear up if creditors force an "acceleration" for early payment on their bonds.
"How bad the outcome ends up being depends on whether bondholders accelerate," said Alejo Costa, strategy chief at local investment bank Puente.
"Acceleration would open a new legal battle for the government that could end up in a new restructuring."
Argentina has foreign currency restructured debt worth about $35 billion while its foreign exchange reserves stand at $29 billion.
U.S. ratings agency Standard & Poor's on Wednesday downgraded the country's long- and short-term foreign currency credit rating to "selective default". The default rating will remain until Argentina makes its overdue June 30 coupon payment on its discount bonds maturing in 2033, the agency said.
Holders of insurance against an Argentine credit default will have their eyes peeled for an announcement from the International Swaps and Derivatives Association (ISDA). If ISDA declares an Argentine default, the total amount of money that would be paid out is just over $1 billion.
After two days of talks with holdouts in New York, Argentine Economy Minister Axel Kicillof on Wednesday evening told reporters that Argentina was not in default because it had made the June $539 million interest payment to holders of exchanged bonds - even if this had not reached creditors by July 30, at the end of the month-long grace period.
Judge Griesa called the payment illegal and blocked the funds' onward transfer to creditors. It remains in limbo in the Buenos Aires account of trustee agent Bank of New York Mellon.
Argentines were sanguine about news of the default.
"We have been in a similar situation before, and we will make it through," said a 27-year old employee at an automobile firm who declined to give his full name. "The sun rises each day. It will get resolved, be it next week, or next month."
(Additional Reporting by Richard Lough and Eliana Raszewski; Editing by Ken Wills)
Posted by jan joost teunissen at 12:59 AM No comments: